You are here: Home > News and Media > News > Starbucks Tries to Save 6 Billion Cups a Year from the Trash … With...

News from PRI’S The World 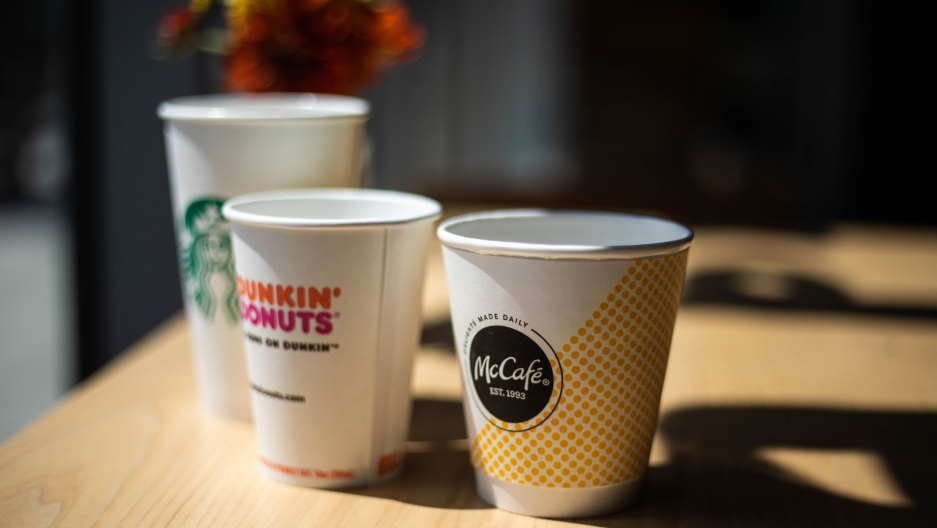 Paper coffee cups have a thin layer of plastic on the inside to prevent leaking. It’s a well-engineered vessel, but difficult to recycle. Credit: Steven Davy/PRI

You go to the coffee shop and take your coffee to go. You enjoy your drink, then throw the paper cup in the trash. Or do you put it in the recycling? It’s confusing.

A lot of us — people everywhere — are using to-go cups these days.

“A recent report said that there are 600 billion cups — billion with a ‘b’ — that are produced and sold globally on an annual basis. So that’s a lot,” says Christy Slay with The Sustainability Consortium.

To help reduce those numbers, Starbucks and McDonald’s are launching a three-year project to build a better cup: one that’s both fully recyclable and compostable.

Here’s the big problem with the paper ones you get there and in other coffee shops.

“They look like paper, but they actually have a thin layer of plastic on the inside,” Slay says.

That plastic coating keeps the cups from leaking. Problem is, it also makes the cups really hard to recycle, and only a few facilities in the world can do it. These cups also can’t be composted. “And so, they get thrown in the trash,” Slay says.

“Typically they’re compostable in industrial settings, so not your backyard compost that you and I might have, but at fairly technically advanced composting facilities.”

A few companies have already rolled out compostable coffee cups. But Dylan de Thomas with The Recycling Partnership says there’s a problem with those cups too.

“Typically they’re compostable in industrial settings, so not your backyard compost that you and I might have, but at fairly technically advanced composting facilities.”

There aren’t a lot of those facilities around either. Add it up, companies servicing our coffee habit are in a bit of a conundrum.

The goal of the plan recently rolled out by Starbucks and McDonald’s is to build a paper cup with a plant-based biodegradable liner, a cup that would be more easily compostable and/or recyclable.

Starbucks is calling it a “moon shot” for sustainability, and the coffee giant and McDonald’s are also dangling $1 million dollar prize to anyone else who can figure it out.

“It’s not necessarily very technically hard, although there are technical hurdles to overcome to make something recyclable and compostable,”

But even with these companies’ vast resources, it’s proving to be a really big challenge. Starbucks has already tried out 13 prototypes in the past year. So why exactly, in the 21st century, is it so hard to build a better paper cup?

“It’s not necessarily very technically hard, although there are technical hurdles to overcome to make something recyclable and compostable,” says Bridget Croke with Closed Loop Partners, a firm working to build what they call a circular economy. “[It’s] a fancy way of talking about turning waste into value.”

Croke says the big challenge for McDonald’s and Starbucks is the systems that are already in place.

“Almost anything is technically recyclable,” Croke says. “But recycling is a business, and if materials can’t move through the recycling system and be turned into a commodity that has value, it’s not functionally recyclable.”

In other words, even if you can come up with a more recyclable coffee cup, there just aren’t enough places out there that can actually make it worth recycling.

So along with investing in a new kind of cup, McDonald’s, Starbucks and groups like Closed Loop Partners are investing in ways to improve municipal recycling and composting processes, so when a new cup does arrive, they’ll be ready.

“If we can make it flexible, we’re going to have more success keeping that out of the landfill long-term,” Croke says.

The environmental advocacy organization Stand.earth is pleased with McDonald’s and Starbucks efforts, but only to a point. Executive director Todd Paglia says the companies are misguided in trying to make a cup that’s both recyclable and compostable.

“They are a cultural force in a lot of ways — they need to be one on the issues of waste. And they can be.”

“It’s 100 percent their responsibility,” Paglia says. “They’ve created this problem, they need to solve it.”

“If you use a composting cup, what you’re doing is you’re taking the forest, you’re cutting it down, you’re making it into a cup that you hold in your hand for 20 minutes, and it goes into compost, which means you have to cut down more trees to make more cups,” Paglia says.

A truly recyclable cup is good, but Paglia says the ultimate solution is for customers to start carrying their own reusable mugs or tumblers. And he says Starbucks needs to do more to encourage this.

“They are a cultural force in a lot of ways — they need to be one on the issues of waste. And they can be.”

“It’s 100 percent their responsibility,” Paglia says. “They’ve created this problem, they need to solve it.”

Starbucks currently gives people a 10 cent discount in the US for bringing their own cup. Paglia says the coffee giant needs to flip that around and charge extra for a disposable one. He says that’s the only way to really change our behavior.

The company has been trying that out in the UK.

Christy Slay says if you buy to-go coffee even a few times a week and bring your own cup, “that could have a large impact. If you do that over multiple years, you’re talking about a lot of cups.”

So as Starbucks and McDonald’s work toward their “moon shot” cup, in the near-term, most agree that bringing your own might be the best solution.

In My Opinion: Diversion without data is like sailing without a compass

Recycling: A Question of Convenience

GreenBiz | It's Time to Embrace the Value of Waste

WasteDive | Wal-Mart's sustainability efforts to be driven by improved packaging

GreenBiz | How P&G, Unilever are washing beaches clean of plastic